The Commonwealth Government has called for submissions[i] to assist it in developing the 2016-17 Budget, which, barring an early election, is due to be handed down on Tuesday 10 May.

This process is another opportunity to highlight to Prime Minister Malcolm Turnbull, Treasurer Scott Morrison and the Liberal-National Government generally just how ridiculous it is that they are proposing to waste (at least) $158.4 million on something that can be passed by the Parliament, in the usual way, for no cost.

Submissions are due by Friday 5 February 2016, with full details here. This is my submission:

Department of the Treasury

To whom it may concern

Thank you for the opportunity to make a submission regarding what I believe should be the priorities for the 2016-17 Budget.

In this short submission I would like to focus on just one issue that, as well as being the right policy approach, would also have significant Budget benefits, and that is to call on the Turnbull Government to scrap the proposed marriage equality plebiscite.

There are a variety of policy justifications for not proceeding with a plebiscite on this issue, including that holding a public vote is unnecessary because the High Court has already found that Commonwealth Parliament has the constitutional power to pass marriage equality, and that subjecting the human rights of a minority group to such a process is inappropriate.

I, and many other members of the lesbian, gay, bisexual, transgender and intersex (LGBTI) community, also have serious concerns that the campaign leading up to a marriage equality plebiscite will be divisive, and expose LGBTI Australians, and the children of LGBTI families, to increased levels of homophobia, biphobia, transphobia and intersexphobia.

However, there are also strong budgetary reasons why the marriage equality plebiscite should not go ahead.

The Australian Electoral Commission has estimated that the cost of holding a stand-alone plebiscite on marriage equality would be at least $158.4 million.[ii]

Such a significant expenditure of public monies must be considered wasteful when the alternative approach – to pass (or at least to hold a free vote on) marriage equality legislation in Parliament – does not carry any additional cost.

The two media releases, issued by the Assistant Minister to the Treasurer, the Hon Alex Hawke MP, calling for Pre-Budget Submissions, both reiterated the “Government’s commitment to restrain expenditure responsibly”.[iii]

It is difficult to think of a more perfect way to ‘restrain expenditure responsibly’ than by avoiding spending $158.4 million on something which is entirely unnecessary in the first place.

Of course, scrapping the marriage equality plebiscite also fits in with the Government’s broader fiscal policy, as outlined in the Mid-year Economic and Fiscal Outlook (MYEFO), including the “Government’s commitment to returning the budget to a sustainable position and reducing debt over the medium term”[iv].

With an underlying cash deficit estimated at $33.7 billion (or 2% of GDP) in 2016-17 (when such a plebiscite may be held), and net debt now expected to peak at 18.5% of GDP in 2017-18, it is undeniably profligate to spend an extra $158.4 million on a public vote the outcome of which is not even binding on Government MPs. This money would instead be much better used to lower the cash deficit and therefore reduce net Government debt.

Other Budget Rules, contained in the MYEFO, are also relevant to the consideration of whether to allocate money in the 2016-17 Budget to holding a plebiscite on marriage equality.

For example, I note that the MYEFO states: “This strategy sets out that:

Given the monies required to hold a marriage equality plebiscite have not been allocated in the Budget to date[vi], that means it would need to be included in the 2016-17 Budget as a ‘new spending measure’ and, according to the Government’s own rules, there must be at least an equivalent amount of reductions in spending elsewhere.

It seems absurd to me that the Government would need to cut $158.4 million in spending on justice, or health, or education, or any number of other areas, simply to hold a plebiscite on something that could be resolved by the Parliament in the ordinary course of business for no extra cost.

If the Government does decide to continue down this path, and makes such cuts in order to fund a marriage equality plebiscite, then in the interests of transparency I urge it to include the details of these cuts in the Budget, linking them to this ‘new spending measure’, thereby allowing Australians to make up their own minds whether these actions meet the stated ‘commitment to restrain expenditure responsibly’.

Of course, if the Government is interested in spending a similar amount of money on issues that affect lesbian, gay, bisexual, transgender and intersex (LGBTI) Australians, then I would suggest a variety of different ways in which it could do so that would bring much greater benefit, including:

Even if the Turnbull Government is not interested in funding these programs, it would nevertheless be preferable to use this $158.4 million to reduce overall Government deficit and debt, rather than to waste it on holding an unnecessary, inappropriate and divisive public vote.

Scrapping the marriage equality plebiscite, and holding a parliamentary vote instead, might be the easiest Budget saving any Government could ever hope to make.

Thank you for taking this submission into consideration. 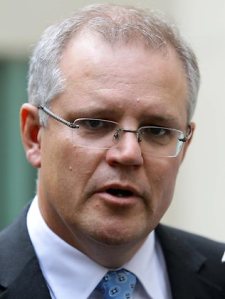 Treasurer Scott Morrison, tasked with ‘restrain[ing] expenditure responsibly’. Scrapping the marriage equality plebiscite would be a good place to start.

[ii] As quoted on page 22 of the Senate Committee Report: Matter of a popular vote, in the form of a plebiscite or referendum, on the matter of marriage in Australia, 15 September 2015.