On Saturday 30 November, Prime Minister Scott Morrison revealed that his Government would not meet its commitment to introduce the Religious Discrimination Bill into Parliament before the end of the year.

Instead, he announced they would be releasing ‘a revised and further exposure draft of the RDA Bill to reflect the Government’s response to the consultation to date and provide further opportunity for engagement.’ [i]

On an optimistic reading, this means there is more opportunity for the Government to listen to all of the criticisms of this legislation, from women, LGBTI people, legal organisations and the Australian Human Rights Commission, that the Religious Discrimination Bill requires substantial amendment because it authorises discrimination against large sections of the Australian community.

Unfortunately, based on all evidence to date, we have more reason to be pessimistic, and instead fear that the Government will only listen to religious fundamentalists demanding even more special privileges to discriminate.

The only change to the Bill which Attorney-General Christian Porter highlighted at the National Press Club on 20 November[ii] was an amendment to ensure that ‘religious hospitals and aged-care providers will be given protections equivalent to those given to other religious bodies, in relation to employment of staff’ (in other words, allowing them to discriminate).

There have been no indications of positive changes to the Bill, to reduce its adverse impact on women, LGBTI people, single parents, divorced people, people in de facto relationships, people with disability and others. Nor was there any reason to be hopeful in the Prime Minister’s media release confirming the delay.

However, what I really want to highlight here is the inconsistency of two of Morrison’s statements in that release.

Specifically, he criticises Labor for ‘a lack of genuine commitment … to the principle that Australians who hold sincere religious beliefs in this country deserve the same legal protections that are rightly provided in other areas such as gender and race.’

But then later the Prime Minister also says ‘Our Government will continue to proceed on the basis of good faith with a view to having a balanced and common sense Bill that protects the important religious freedoms that Australians can sadly no longer take for granted.’

Had Morrison actually delivered the former, legislation that simply protects people of faith, and no faith, against discrimination on the same basis as gender, race and other attributes, then not only would Labor have likely welcomed it, but so too would the majority of Australians, including LGBTI people. After all, we know what discrimination is like, and don’t want other people to experience it.

Instead, his Government has produced a ‘Religious Discrimination Bill’ in name, but a religious freedom law in substance. The most problematic elements of the Exposure Draft – re statements of belief, large employer codes of conduct, conscientious objections by health practitioners and the general ‘religious exception’ in clause 10[iii] – all purport to protect ‘religious freedom’ rather than the right to non-discrimination.

Obviously, a lot has been written about the serious flaws of these provisions (including by the author), and particularly about the discrimination they permit against other groups.

Perhaps one consequence that hasn’t received as much attention is that they actually make this legislation not just inconsistent in its objectives, but internally contradictory as well.

That’s because these same provisions also allow discrimination against people on the basis of their religious beliefs, or lack of belief – making it a Religious Discrimination Bill that perversely encourages religious discrimination.

For example, the protections for ‘statements of belief’ in clause 41 – which effectively render them exempt from all Commonwealth, state and territory discrimination laws – don’t just apply to comments that discriminate against women, LGBTI people, single parents, divorced people, people in de facto relationships and people with disability.

Clause 41 also protects statements of belief that discriminate on the basis of religion. This includes, for example, saying the followers of other religions are ‘unclean heathens destined for eternal damnation’. Just like sexist, homophobic, transphobic and ableist statements, these derogatory comments will be protected irrespective of where they occur, including in the workplace, in education, in health, and in the provision of goods and services.

In the same way, clauses 8(3) and (4) won’t just protect a certain footballer telling gay and trans people they are going to hell – it will protect any religious employee who, outside ordinary work hours, tells people from other religions they’re going to hell, too.

The conscientious objection provisions, in clauses 8(5) and (6), are an even bigger threat. As well as allowing health practitioners, from GPs and pharmacists through to optometrists, physiotherapists and even podiatrists, to refuse to serve women, or LGBTI people, they could potentially be (ab)used by a health practitioner to refuse to serve Jewish people, or Muslims, or people from other minority faiths.

But the biggest threat of all – especially to minority religions – is found in clause 10. It allows religious schools and universities, charities and ‘any other body that is conducted in accordance with the doctrines, tenets, beliefs or teachings of a particular religion (other than a body that engages solely or primarily in commercial activities)’,[iv] to discriminate on the basis of religious belief.

This clause therefore permits discrimination against teachers and students, as well as the employees of – and even people accessing – charities and community services. And, as we have already seen, Attorney-General Porter plans to expand this clause even further to allow religious hospitals and aged care services to discriminate in relation to employment (at the very least).

Technically, clause 10 protects all religious organisations equally – they will each be able to discriminate in terms of who they employ (or refuse to employ), and provide services to (and who they exclude).

Practically, this clause will primarily benefit the largest religious organisations – including the Catholic and Sydney Anglican[v] churches and related education, health and community services organisations – at the expense of everyone else.

With the massive outsourcing of public services to these bodies over the past two to three decades, they now receive billions and billions of dollars each and every year, and will be explicitly permitted to use that public funding to discriminate.

Not just in relation to lesbian, gay, bisexual and transgender people (which is sadly already allowed under the Sex Discrimination Act 1984 (Cth), and which the Morrison Government steadfastly refuses to change), but also in relation to religious belief, or lack of belief.

That means a professor being denied a job because they are Jewish.

A doctor refused employment at a hospital because they are Muslim.

A school student expelled because they are atheist.

A homeless person missing out a bed in a shelter because they are Hindu.

A charity worker rejected for promotion because they are Buddhist.

An aged care employee losing shifts because they are agnostic.

All these scenarios could be legal under the Religious Discrimination Bill, as long as it was a religious organisation doing the discriminating. And they would be using taxpayers’ money – your money, my money, our money – to do so.

This outcome – entrenching the power and privilege of the major churches, namely the Catholics and Sydney Anglicans, over and above the rest of us – is the inevitable consequence of the internal contradiction of this legislation.

The Morrison Government has chosen to undermine what could and should have been a standard Religious Discrimination Bill – one that would have prohibited most, if not all, of the scenarios described above – with provisions that instead promote ‘religious freedom’.

With their decision to release a second Exposure Draft for public consultation, the Government now has the opportunity to make a better, and more informed, choice, and to prepare legislation that reduces religious discrimination rather than increasing it.

Unfortunately, I can’t seem to suspend my disbelief that they will choose the right option. Based on everything leading to this point, I have no faith the Government’s ‘revised and further exposure draft’ Bill will be any less of a threat to women, LGBTI people, single parents, divorced people, people in de facto relationships and people with disability.

But we must not forget it is also a threat to minority religions, to Jewish people, Muslims, Hindus, Buddhists, atheists and agnostic people alike. They too will be subjected to discriminatory statements of belief, and potentially denied access to health care, just because of who they are. And they will be refused employment, and discriminated against in education, health, aged care and community services, all by ‘mainstream’ religious organisations using public monies to do so.

Hopefully, they – as well as the many decent Catholic and Anglican people of good faith who oppose new special rights to discriminate – will join us in demanding genuine religious anti-discrimination laws, to replace Morrison’s badly botched Bill. 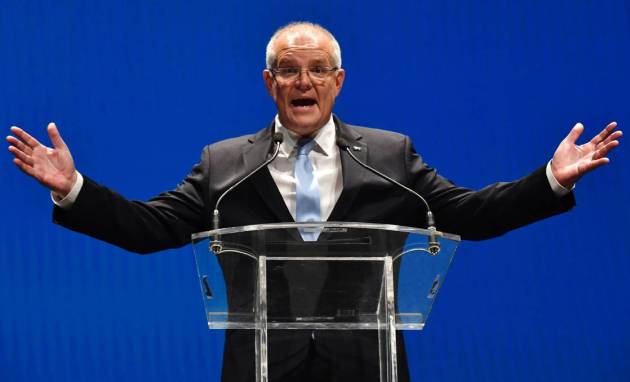 By choosing to include expansive ‘religious freedom’ provisions, Scott Morrison has undermined the ability of the Religious Discrimination Bill to actually prohibit religious discrimination.

[iii] The Growing List of Problems with the Religious Discrimination Bill.