Re: Your Proposed Marriage Equality Plebiscite

We don’t personally know each other[i]. Which means that the only things I know about you are what I can glean from the media.

Just over four months into your Prime Ministership, three main themes have emerged:

Newspaper reports from around the time you deposed Tony Abbott estimated your net worth at $180 million[ii], or ‘conservatively’ at around $200 million[iii].  And you don’t just own a lot of money, you ‘own’ that description too, responding to a question from Tony Burke in Parliament in October with the following:

“… really, if the honourable member wants to go around wearing a sandwich board saying, ‘Malcolm Turnbull’s got a lot of money,’ feel free. I think people know that.”[iv]

If there’s one thing that even your detractors are compelled to acknowledge, it is that you are not wanting for intelligence. Indeed, there are many people in public life today, no doubt including colleagues of yours, who would like to think that they are smartest person in the room. With you it seems that boast at least has the chance of being correct more often than not.

As we head into an election year, it is still not entirely clear what the Government you now lead is going to do differently from its first two years in office. What is clear, at least in presentation if not (yet) in substance, is that you are not Tony Abbott.

In fact, some might say you have rather ‘intelligently’ managed to employ that singular qualification – that you are not Tony Abbott – to retake the leadership of the Liberal Party. It also appears to be the primary explanation for why you are currently so far ahead in the polls. Right now, it even looks like you might be able to parlay the truism, that you are not someone else, into winning another term in Government.

If those three characterisations are accurate – you’re rich, you’re intelligent and you’re not Tony Abbott – then my question to you is this: why do you support a plebiscite on marriage equality?

A marriage equality plebiscite is:

It is difficult to imagine a bigger waste of money than holding a plebiscite on this subject, when the logical alternative is introducing it through an ordinary parliamentary vote (in the same way that it was originally banned, by the then Howard Liberal-National Government, in 2004).

The Australian Electoral Commission has estimated that the cost of holding a stand-alone plebiscite would be at least $158.4 million[v]. Well, imagine one of those agile and innovative entrepreneurs (that you love so much) coming to you with the following proposition:

a) You could make this change, for no additional cost, within a month or two, and with minimal disruption to business as usual, or

b) You could instead waste the equivalent of at least three quarters of your personal net worth trying to introduce this reform, take 18 months to 2 years, and ensure there is maximum distraction from everything else you wish to accomplish?

I don’t imagine you accumulated the wealth you have today by choosing a) very often.

What transforms choosing option b), above, from being merely a very poor decision, into an undeniably stupid one, is that even after holding a plebiscite, you will still have to pass marriage equality legislation in parliament anyway.

There is no constitutional reason for holding a public vote on this topic. The High Court has already made it abundantly clear that Commonwealth Parliament has the power to introduce marriage equality – no referendum, or plebiscite, is required.[vi]

Nor is it appropriate to subject the human rights of a minority group to what is essentially a popularity contest, preceded by what will no doubt be a vicious and ugly public debate driven by the homophobia, biphobia, transphobia and intersexphobia of many of those opposed to the legal equality of lesbian, gay, bisexual, transgender and intersex (LGBTI) Australians.

About the only reason anyone has been able to identify for holding a plebiscite on this topic is to try to paper over the cracks of deep division within the Liberal and National Parties – which sounds doesn’t sound like a very intelligent use of $158.4 million of taxpayers’ money to me.

The then Prime Minister Tony Abbott put forward the idea of a plebiscite when marriage equality was discussed at the extraordinary joint Liberal-National Party room meeting on 11 August last year.

Forgive me for being cynical for a moment, but here is a man so opposed to the concept of marriage equality that he is comfortable with his own sister being denied the same legal rights he enjoys simply because of her sexual orientation.

So, when Abbott emerged from the Coalition Party room, happy to declare support for a referendum or plebiscite as official Government policy, most LGBTI people saw it as essentially a stalling tactic, as a way to postpone the inevitable for as many years as possible – pushed by a man who, it is fair to say, does not have the best interests of LGBTI Australians at heart.

Indeed, it was reported that you spoke against the proposal for a public vote at that meeting, and told reporters the following day that a parliamentary conscience vote would have been “consistent with Liberal party tradition”, with the additional benefit that:

“One of the attractions of a free vote is that it would have meant the matter would be resolved in this Parliament, one way or another, in a couple of weeks”[vii].

And yet, despite all of this, now that you occupy the top job, you are persisting with your predecessor’s approach, of holding an unnecessary, inappropriate, wasteful and divisive plebiscite.

I started this letter by saying that we don’t personally know each other. As well as me not knowing you, that means you don’t know me either.

You don’t know that I have been together with my partner, Steven, for seven and a half years.

You don’t know that this coming Saturday, 23 January 2016, will mark the sixth anniversary of our engagement.

And, as someone who has been married to your own partner for almost 36 years, you can’t know what it feels like for successive Governments, Coalition and Labor and Coalition once more, to repeatedly tell you that your relationship is less worthy of recognition than the relationships of other Australians, simply because of who you are.

Steven and I, and tens of thousands of other couples across the country, know the bitter taste that is left in one’s mouth by this abhorrent, and completely unjustified, discrimination.

As Prime Minister of this country, a position that you have coveted for so long, you have the power to change this situation.

You could choose to start 2016 by doing what you know is right – by reverting to the policy position which you supported right up until you assumed your current titular position, and pushing for a parliamentary vote on marriage equality in the coming session.

If you did, marriage equality could be reality in Australia within a matter of months, and you would be remembered as the leader, in the true sense of the word, who helped to finally make it happen.

Or you could instead choose to continue to support a profligate and stupid plebiscite on marriage equality.

In doing so, not only would you be entirely indistinguishable from Tony Abbott on this issue, you would join the long line of other so-called ‘leaders’, from John Howard, to Kevin Rudd, Julia Gillard and Tony Abbott, whom Australians will need to achieve marriage equality in spite of, not because of.

After the last national public vote on an issue in 1999, a certain president of the Australian Republic Movement said of John Howard that:

“History will remember him for only one thing. He was the prime minister who broke this nation’s heart.”[viii]

Well, I won’t be quite so grandiose here but please know this: if you continue to support an unnecessary, inappropriate, wasteful and divisive plebiscite on marriage equality, some people will remember you for only one thing – and that is for breaking many LGBTI Australians’ hearts, mine included. 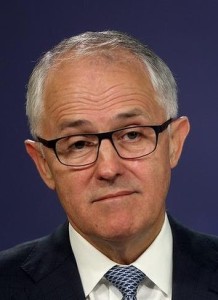 [i] We did sit next to each other, once, at a forum on climate change in the lecture theatre at Parliament House in Canberra, but we weren’t introduced, so I don’t think that counts.

[v] As quoted on page 22 of the Senate Committee Report: Matter of a popular vote, in the form of a plebiscite or referendum, on the matter of marriage in Australia, 15 September 2015