Unfortunately, although perhaps not unexpectedly (because most first-time major submissions are rejected or at least deferred), the PBAC decided not to support the application for Truvada as PrEP to be added to the Pharmaceutical Benefits Scheme (PBS).

In its decision the PBAC stated that it “did not recommend the listing of Truvada for HIV pre-exposure prophylaxis (PrEP) on the basis of unacceptable and uncertain cost effectiveness in the proposed population and at the proposed price.”

The PBAC also included comments questioning the expected adherence of people taking PrEP: “the efficacy of Truvada was highly dependent on adherence, and that it is not clear if subjects at high risk of contracting HIV due to self-reported low adherence to safer sex practices would also have lower adherence to medication.”

This last point was strongly rejected by HIV activists and organisations when the PBAC decision was released. From the Star Observer:

“This statement is insulting, unfair, and paternalistic. It is a given that for medications to work properly, they must be taken as directed,” Nic Holas, co-founder, the Institute of Many (TIM) – a peer-run community of people living with HIV – said.

“The reasons why a person may have a ‘low adherence to safer sex practices’ are complex and varied, and should not be the basis for withholding PrEP as a necessary addition to the prevention toolkit.”

VAC’s Simon Ruth added: “Drawing a comparison between risk behaviour and adherence to medication is illogical. It is wrong and offensive to assume that gay men would not be taking every measure to protect themselves when it comes to HIV, and we view PrEP as the most powerful tool for doing that.

“PrEP demonstration projects have shown that gay men’s adherence to PrEP is extremely high, and comments like this are unhelpful, stigmatising and homophobic.”

Interestingly, and perhaps somewhat disappointingly, a new application for Truvada as PrEP is not on the agenda for the March 2017 meeting of the PBAC meaning it cannot be considered again until July 2017 at the earliest.

Even if that application is successful, however, it would still be another 3-6 (or even potentially 9 months) from that meeting until it is finally included on the PBS – or likely sometime in the first half of 2018.

In the meantime, most Australian states and territories have commenced large-scale trials of PrEP, especially in populations at higher risk of acquiring HIV (including gay men). This includes:

In other jurisdictions, please check with your local AIDS Council (or equivalent) for more.

As part of this process, the PBAC accepts submissions from relevant organisations, and from members of the community who would either be personally affected by, or who are interested in, this decision. Further details on the submission process can be found here (including the main questions that a community submission should address).

The following is my personal submission calling for the approval of PrEP as a vital HIV prevention measure to help achieve the goal of the virtual elimination of HIV transmission by 2020.

Consumer input: Please indicate whether you are a person with this medical condition, a friend or family member, a prescriber, a representative of an organisation or other interested person:

That also means I am a member of a community that would particularly benefit from the availability of a proven, highly-effective HIV-prevention measure such as the use of Truvada (tenofovir + emtricitabine) for Pre-Exposure Prophylaxis (PrEP).

Therefore, while based on my personal circumstances I will likely not be a candidate for PrEP, I passionately believe it should be made available through the PBS so that other members of my community can engage in the HIV-prevention actions that would be most effective for them, and not be prevented from doing so based on factors such as geography or cost.

It was 35 years ago this week that the first medical report of a mysterious illness affecting homosexual men in New York and California was published. Within a few years the entire world knew about AIDS, and the virus that could cause it – HIV could be transmitted sexually and via other means involving blood-to-blood contact, it was potentially deadly, and there was neither a vaccine nor a cure.

Fortunately, in the decades since there have been some significant advances, not least of which was the treatment revolution from 1996 onwards which transformed HIV from a (far-too-often) lethal virus to a chronic manageable condition (at least for those who had access to these life-changing medicines).

However, at the other end of the spectrum, prevention, there has been far less progress. There is still no vaccine – and it doesn’t seem like there will be one in the short-to-medium-term either.

There have been some advances involving ‘treatment as prevention’, where HIV treatment resulting in Undetectable Viral Load dramatically lowers the risk of transmission, which is especially beneficial for people in sero-discordant relationships.

But the effectiveness of treatment as prevention on a population-wide level also relies on extremely high levels of HIV testing among priority populations (levels which, despite increases in some well-served areas, haven’t been achieved in all locations and harder to reach populations).

Which means the primary prevention method for people in communities that are at disproportionate risk of HIV transmission within Australia, including gay men, remains exactly the same as it was in the mid-1980s – the consistent use of condoms. While that is obviously effective for a significant number of people, and will continue to remain so for many, it has clearly never been effective for everyone.

The proof of that is in the number of new HIV diagnoses reported each year. The Kirby Institute’s 2015 Annual Surveillance Report on HIV, viral hepatitis and sexually transmissible infections found that “[t]he number of HIV infections newly diagnosed in Australia has remained stable for the past three years, with 1,081 cases in 2014, 1,028 in 2013 and 1,064 in 2012” (p11), with sexual contact between men continuing to be the main route of transmission, accounting for approximately 70% of those notifications.

However, while ‘stable’ might sound vaguely positive, the Report further notes that “[t]he number of new HIV diagnoses has gradually increased by 13% over the past 10 years, from 953 diagnoses in 2005” (p32). In fact, the longer-term trend has been one of a gradual increase, from 1999 onwards, which is obviously a concern.

The biggest concern is that, more than three decades into this epidemic, more than 1,000 people are still being diagnosed with HIV in Australia each year. That is a figure I doubt anyone would find ‘acceptable’.

Indeed, recent HIV Strategies at both Commonwealth and NSW levels have made prevention a greater focus to help address this issue. The Seventh National HIV Strategy 2014-2017 lists as its first goal to “work towards achieving the virtual elimination of HIV transmission in Australia by 2020”.

The NSW HIV Strategy 2016-2020 also aims to “virtually eliminate HIV transmission in NSW by 2020”. This is part of the overall ‘Ending HIV’ agenda pursued by the NSW Government in partnership with community organisations such as ACON.

But neither the NSW nor Commonwealth Government Strategies will be able to meet their goals without the introduction of new methods to improve HIV prevention.

One such method is the use of Truvada (tenofovir + emtricitabine) for Pre-Exposure Prophylaxis (PrEP). As has been demonstrated in multiple international studies[i], PrEP is highly (although not 100%) effective in preventing HIV transmission in sex between men.

Fortunately, for many it already is – or soon will be. This includes gay men who are accessing PrEP through direct personal importation schemes. It also covers those men who have already been or will shortly be enrolled in the PrEP trials being run by various State Governments, including NSW, Victoria and Queensland.

However, while these trials are obviously welcome, and, in the absence of PBS listing accessing PrEP online is an entirely rational personal decision to make, there are problems with the current situation – including that access to PrEP is dependent on geographical location and/or financial circumstance, and that some of the people purchasing PrEP online may not be seeing their GP regularly for appropriate monitoring and sexual health check-ups.

This is clearly not a sustainable position. And, because not all those people who would benefit from PrEP are currently able to access it, nor will they be able to at least in the short-term, the current ad hoc approach means Australia will not achieve the full HIV transmission reductions that could be possible.

The only way to make the most out of the new ‘technology’ that is Truvada as PrEP is to ensure that it is made available through the PBS to people at high risk of HIV transmission.

This would then allow gay men – members of my community – to be able to engage in the HIV-prevention measures that are most effective for them, with the potential to take PrEP for those periods in their life when their risk of acquiring HIV is higher.

I genuinely believe that, only by adding Truvada as PrEP to the overall HIV prevention mix, alongside other measures such as condoms, increased testing and treatment to support treatment as prevention, and better and more appropriate sexual health education, do the Commonwealth and NSW Governments stand any chance of achieving their goals of virtually eliminating HIV transmission by 2020. And, with notifications stubbornly remaining above 1,000 each and every year, those are goals that I hope everyone, including the members of the PBAC, will support.

How did you learn about this consumer submission process to be able to submit your comments today? Are there any other comments you would like to make about the process for submitting consumer input to the PBAC?

I learnt about the consumer submission process regarding Truvada for PrEP through my involvement in the blood borne virus sector (including viral hepatitis as well as HIV) and specifically via the advocacy for HIV prevention, including access to PrEP, by organisations such as ACON and AFAO. 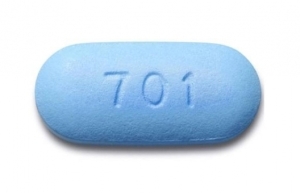 The little blue pill that will make a huge impact on HIV prevention.