10 days ago, the NSW Premier Barry O’Farrell suggested that Taylor Square could be renamed after former High Court Justice Michael Kirby. While I support recognising his achievements, I think that it would be better to rename the square after both Mr Kirby and current, lesbian High Court Justice Virginia Bell. The outcome would reflect both the gay and lesbian history of this location. Below I have included the text of a letter which I sent to the NSW Premier on this subject this afternoon. 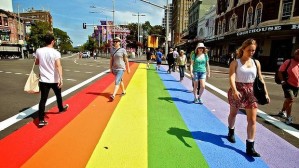 I am writing in relation to comments which you made in the Legislative Assembly on Thursday 28 February 2013, in response to a question from the Member for Sydney, Mr Alex Greenwich MP, regarding the Government’s commitment to the Lesbian, Gay, Bisexual, Transgender and Intersex (LGBTI) community.

In particular, during your answer you suggested that Taylor Square could be renamed after former High Court Justice Michael Kirby, who, as you said in the Chamber, is “a great individual who epitomises that good community.”

While I agree with the sentiment of your proposal, I note that Mr Kirby is already highly decorated, including having the former National Centre in HIV Epidemiology and Clinical Research (NCHECR) at the University of New South Wales renamed the Kirby Institute for Infection and Immunity in Society in his honour.

Of course, this does not mean the state of New South Wales, and the City of Sydney, should not further celebrate the contributions of such an eminent jurist, and the first openly gay man appointed to the High Court.

However, I would humbly like to suggest that, if you wish to pursue this proposal, you could also consider co-naming the square after the first openly lesbian woman appointed to the High Court, Ms Virginia Bell. The location could then be known as either the Kirby-Bell Square or the Bell-Kirby Square.

I make this suggestion because I think it is important to recognise and celebrate the achievements of both the gay and lesbian communities, who each have a historical connection to Taylor Square.

Ms Bell, who replaced Mr Kirby on the High Court following his retirement, is another distinguished resident of Sydney, and one who began her legal career in the inner-city working at the Redfern Legal Centre.

Ms Bell was also a participant in the very first Sydney Gay Mardi Gras on 24 June 1978, which, fortuitously, assembled at Taylor Square before commencing the march. Renaming Taylor Square in Ms Bell’s honour, alongside Mr Kirby, would therefore acknowledge some of the important LGBTI history of this particular location.

Thank you in advance for considering my suggestion for renaming Taylor Square to be Kirby-Bell or Bell-Kirby Square, which I think would be more inclusive of the lesbian and gay communities of Sydney.