The following is my submission in response to the Queensland Government Registering Life Events: Recognising sex and gender diversity and same-sex families Discussion Paper. For more information on this review, go here.

To the BDM Act Review Team

Thank you for the opportunity to provide a submission in response to the Registering Life Events: Recognising sex and gender diversity and same-sex families Discussion Paper.

I write this submission as a long-time advocate for the lesbian, gay, bisexual, transgender and intersex (LGBTI) community.

I also write this as a cisgender gay man, and am therefore guided by the views of those groups directly affected by the provisions of the Births, Deaths and Marriages Registration Act 2003.

Specifically, with respect to questions 1 to 7 I endorse both the submission to the current review by Intersex Human Rights Australia (IHRA),[i] and the Sex and Gender Advisory Group’s letter to the Commonwealth Attorney-General’s Department Review of the Australian Government Guidelines on the Recognition of Sex and Gender.[ii]

Where there is any inconsistency between this submission and the views of these groups, I defer to them as experts in these areas.

Question 1. How should a person’s sex be recorded on the birth, adoption and death registers?

Question 2. Do you have any other comments on this issue?

I support the views expressed in Recommendation 3 of the Intersex Human Rights Australia submission that: Queensland should end legal classification of individuals by sex or gender, in line with the Darlington Statement and the Yogyakarta Principles plus 10.

I also agree with IHRA that this recommendation is unlikely to be achieved in the short-term and therefore support their recommendation 4, namely that: In the absence of an end to legal classification of individuals by sex or gender, Queensland should recognise ‘non-binary’, alternative (for example, self-affirmed) and multiple sex markers. Changes should be available [via] a simple administrative procedure, for example, via a statutory declaration.

I note that this terminology, and in particular the use of the term ‘non-binary’, was also supported by the Sex and Gender Advisory Group in its letter of 24 September 2015.

Question 3. Should any changes be considered to the BDMR Act and BDMR Regulation to improve the legal recognition of sex and gender diverse people in Queensland? If so, what should the changes be?

Question 4. Should any changes be made to the BDMR Act’s provisions regarding an application to note a reassignment of sex for children/young people under the age of 18? If so, what should the changes be?

Yes, significant changes must be made to the Births, Deaths and Marriages Registration Act 2003 to improve the legal recognition of sex and gender diverse people in Queensland. This includes the removal of the major hurdles that currently prevent people from accessing accurate and appropriate identity documentation.

First, the requirement that trans and gender diverse people must have ‘sexual reassignment surgery’[iii] before being able to update their sex on the birth register must be removed. This requirement is inappropriate as not all transgender people want or are able to undertake such procedures (for a variety or reasons, including financial).

Second, the requirement that applications to note the reassignment of a person’s sex ‘must be accompanied by statutory declarations, by 2 doctors, verifying that the person the subject of the application has undergone sexual reassignment surgery’ [section 23(4)(b)] must also be removed. The medicalisation of identity recognition processes is also inappropriate – doctors should not be ‘gatekeepers’ of the identity of trans and gender diverse people.

The process for updating sex and gender details should be based on the experience and/or identity of the individual involved – not the opinion of medical ‘experts’ – and should be straight-forward, most likely affirmed through a simple statutory declaration.

The same principles should also apply with respect to minors, with no medical gatekeepers involved, and the only caveat being that they are able to demonstrate their capacity for consent. Obviously, this also means that where a minor is able to demonstrate such capacity, they should be permitted to amend their identity documentation in the absence of approval from parent(s) or guardian(s).

Finally, I endorse Recommendation 6 of the Intersex Human Rights Australia submission that: In the absence of legislation and regulation that implements prior BDM recommendations, the Queensland government should ensure that a separate, simple and accessible pathway is available for people born with variations of sex characteristics to correct details on birth certificates.

Question 5. Should the BDMR Act contain provisions to allow for the reassignment of a person’s sex for individuals who reside in Queensland but whose birth was registered elsewhere?

Question 6. Should BDMR Act allow for the issuing of a gender recognition certificate/identity acknowledgement certificate which can be used by a person as proof of their sex or gender?

Question 7. Do you have any other comments on this issue?

Yes, I support the inclusion of provisions to allow for the reassignment of a person’s sex for individuals who reside in Queensland but whose birth was registered elsewhere. This would seem to be an important practical measure for people who are unable to update these details in other jurisdictions, for a variety of possible reasons.

I am not in a position to comment on the process for such recognition – including the specific proposal for the issuing of a gender recognition certificate/identity acknowledgement certificate – and defer to the views of trans, gender diverse and intersex organisations on this question.

Question 8. Should the BDMR Act be amended to permit same-sex parents to choose how they are recorded on a birth or adoption registration?

Yes, although this should not be limited to ‘same-sex parents’ – all parents should be able to nominate how they are recorded. This would better reflect the diversity of modern families, not just in terms of sexual orientation and gender identity, but also in terms of methods of family creation.

Question 9. If so, what descriptors should be available and in what combinations?

I am not in a position to comment on what other terms may be preferable (especially with respect to the potential use of ‘birth mother’ or ‘birth parent’) but encourage the BDM Act Review Team to consult directly with rainbow families on these issues.

Question 10. Do you have any other comments on this issue?

I take this opportunity to pre-emptively express the view that, in contemporary Australia, there is already a wide range of family structures in existence – including where children are raised by three or four different parents – and that the law should be amended to reflect this reality.

I also take this opportunity to express my support for the first two recommendations of the Intersex Human Rights Australia submission to the current review, namely that:

Recommendation 1. Queensland should protect children’s right to bodily integrity, in line with the Darlington Statement and the Yogyakarta Principles plus 10

Recommendation 2. The Queensland government should protect people from discrimination and violence on grounds of ‘sex characteristics’, in line with the attribute defined in the Yogyakarta Principles plus 10.

These are important issues and both represent serious shortcomings in Queensland law (as well as in other jurisdictions within Australia). The Queensland Government has in recent years adopted a progressive agenda on LGBTI issues overall – I strongly encourage it to add both of these items to that list.

Thank you for considering this submission as part of this important review. Please do not hesitate to contact me at the details below should you require additional information. 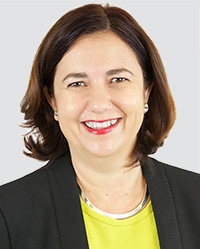 The Palaszczuk Labor Government has already enacted a strong LGBTI reform agenda – but there’s plenty left to do.

[iii] Defined in the Act as:

‘means a surgical procedure involving the alteration of a person’s reproductive organs carried out:

(a) to help the person to be considered a member of the opposite sex; or

(b) to correct or eliminate ambiguities about the sex of the person.’