Today is one of my favourite days of the LGBTI calendar: Sydney Gay & Lesbian Mardi Gras Fair Day. Tens of thousands of people will gather in Victoria Park in a beautiful celebration of our community.

That includes visitors from interstate and from overseas, especially from the Asia-Pacific region, whose numbers will swell over the next fortnight in the lead-up to the Mardi Gras Parade and Party, to be held on Saturday 29 February.

It creates a real buzz around the city. I can only imagine how much louder Sydney will hum in 2023 as we host World Pride, the first city in the Southern Hemisphere to do so.

However, there is a looming threat to LGBTI tourism to Australia, one that has the potential to dampen our celebrations more than even literal rain on our parade: the Government’s proposed Religious Discrimination Bill.

If passed, this legislation could have a negative impact on nearly every aspect of the visitor experience. So much so, it is easy to envisage the following warnings being handed out to lesbian, gay, bisexual, transgender and intersex tourists to Australia in the future:

Not only because our health care system can be expensive for people who are not citizens or permanent residents. But also because the Religious Discrimination Act allows doctors, pharmacists and some other health practitioners to refuse to provide health services, even where this has a disproportionate impact on vulnerable groups. For example, doctors and pharmacists can:

If possible, make sure you bring all of your medications with you, and be careful not to lose them during your stay.

If you do get sick, or lose your medication, while in Australia, you should be prepared for the possibility any individual doctor or pharmacist may refuse to provide a specific health service or treatment. You may need to see several of each in order to obtain access to the medications you need. Unfortunately, it is also likely you will be charged for appointments even where the health practitioner refuses to provide a service.

Importantly, whether a doctor or pharmacist will refuse to provide a specific health service or treatment may not be apparent before you see them. Individual doctors or pharmacists at public hospitals are also entitled to refuse service: if this happens, try asking for a new practitioner until you receive treatment.

Even if a doctor, pharmacist or other health practitioner provides you with the health service or treatment that you need, they are also free to express offensive, humiliating, ‘moderately’ intimidating, insulting or ridiculing views about your sexual orientation, gender identity or sex characteristics while doing so. For example, they may be able to:

Doctors, pharmacists and other health practitioners will be able to express these abhorrent views to you as long as they are based on their religious beliefs.

In fact, people will be to express such views about you, to you, in all areas of public life: on the plane or boat you arrive on; at the airport; in taxis, ubers, buses, ferries, trains and other forms of transport; at hotels, motels and B&Bs; at galleries, museums and other tourist attractions; at cafes and restaurants; at shops. Everywhere you go while you are in Australia.

That’s because the Religious Discrimination Act exempts ‘statements of belief’ from constituting discrimination under all other Commonwealth, state and territory anti-discrimination laws, as long as those statements are based on that person’s religious beliefs and fall short of harassment, threats, serious intimidation or incitement to hatred or violence.

Because abhorrent views are protected where they are based on religious beliefs, you may be able to complain about homophobic, biphobic, transphobic and intersexphobic comments that are not motivated by religion.[iii] Therefore, if you wish to make a complaint about such mistreatment, you will first need to work out whether the person making the statement is religious.

In practice, it may be difficult to determine whether someone is religious and/or whether their anti-LGBTI prejudice is based on their religious beliefs. It may also be physically unsafe to do so. In these circumstances, it may be wiser not to make a complaint and instead try to avoid the person(s) expressing such views (if possible).[iv]

In Australia, the Government outsources a wide range of health, education and other community services to religious organisations. This includes some homelessness shelters, as well as food vans and other welfare services.

Under the Religious Discrimination Act, religious charities are able to discriminate on the basis of religious belief in terms of who they provide these services to, even where they are providing them with public funding.

Given the vast majority of faith-based charities in Australia are Christian, if you experience financial difficulties during your stay and need emergency food or shelter, you should consider pretending to be Christian. You may even need to pretend to be from the specific Christian denomination providing that service (eg Catholic or Anglican).

The above warnings might sound absurd, but if the Government’s Religious Discrimination Bill becomes law in its current form, then they will be all too real.

And we will have a responsibility to provide these warnings to all LGBTI tourists to Australia, not just during Mardi Gras and World Pride, Midsumma, Feast and other pride festivals around the country, but all year round, each and every year.

Of course, it won’t just be tourists who will be adversely affected by this legislation either. In fact, all of the warnings I have included will also apply to LGBTI Australians.

Doctors, pharmacists and other health practitioners will be able to refuse to provide specific health services and treatments to us, and we won’t necessarily know before we make an appointment.

Everyone in public life (including health practitioners, as well as people providing education, accommodation, transportation, food and other goods and services) will be able to express abhorrent views about us, and to us, as long as those views are religiously-motivated.

And if we fall on hard times, our religion (or lack of religion) may determine whether we are able to access some publicly-funded essential services.

The only glimmer of hope is that this post is a potential warning, rather than an actual one. It is only a Religious Discrimination Bill at this stage, not an Act. This disturbing vision of the future can still be prevented from becoming a reality – but only if we take action now.

Please speak up in the coming days and weeks. If you see a federal politician at Fair Day, or at the Mardi Gras Parade, ask them whether they will vote against a Religious Discrimination Bill that takes rights away from the LGBTI community. If they post about it on twitter, facebook or other socials, ask them the same thing.

You should also write to:

because they will help determine whether this legislation becomes a waking nightmare, or just a temporary bad dream.

PFLAG Australia has made this process easy, using the website Equality, Not Discrimination. Equality Australia has a similar helpful platform, here. Make your voice heard, because this legislation will affect LGBTI tourists, and LGBTI Australians, alike. 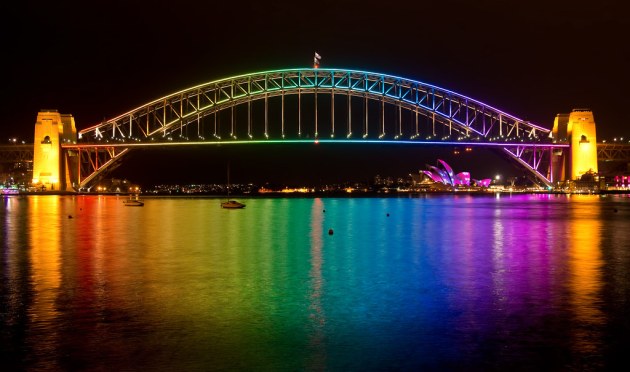 If you have enjoyed reading this article, please consider subscribing to receive future posts, via the right-hand scroll bar on the desktop version of this blog or near the bottom of the page on mobile. You can also follow me on twitter @alawriedejesus

[i] Attorney-General Christian Porter confirmed that trans and gender diverse patients could be denied treatment on the day he released the Second Exposure Draft Religious Discrimination Bill:

“Mr Porter used the example of a GP who did not want to ‘engage in hormone therapies’ for a trans person. ‘That’s fine, but you have to exercise that in a consistent way, so you don’t engage in the procedure at all’.”

[ii] The explanatory notes to the Second Exposure Draft Religious Discrimination Bill confirm this. At para 549, on page 66:

‘For example, a statement by a doctor to a transgender patient of their religious belief that God made men and women in his image and that gender is therefore binary may be a statement of belief, provided it is made in good faith. However, a refusal by that doctor to provide medical services to a transgender person because of their religious belief that gender was binary would not constitute a statement of belief as the refusal to provide services constitutes an action beyond simply stating a belief, and therefore may constitute discrimination on the basis of gender identity.’

[iv] Indeed, this seems to be the Government’s intention – to discourage people who experience discriminatory conduct from bringing complaints.

One thought on “A Potential Warning to LGBTI Tourists to Australia”