The number one reason why I hate marriage inequality in Australia is because it means that I cannot marry the man who I love. 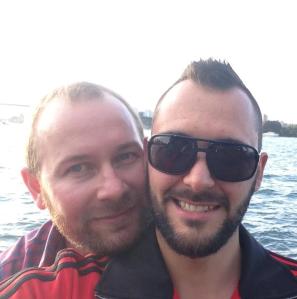 Me (on the left) and Steven (aka the handsome guy with the sunnies).

I was half-tempted to leave it at that because, really, what more do I need to say?

There can be few things more beautiful than the desire to celebrate the love that you have for your partner, in front of your family and friends. I want to experience that with Steve, the person I care about most in the world, and who brings me more happiness than I ever thought possible.

At the same time, there can be few things uglier than a Government intervening to tell you “No”, you cannot experience that, simply because of your sexual orientation (or, for others, gender identity or intersex status). Especially when there is absolutely no legitimate reason why the Marriage Act 1961 should discriminate against LGBTI-inclusive couples, something that is incredibly frustrating, to Steve and me, and to the thousands of other Australian couples in the same situation.

Obviously, the issue of marriage equality is very personal for all of the people that it directly affects. And, in that, I am no different. It does affect me personally and, as the people closest in my life can attest (and as this countdown has made exceptionally clear) I take its denial very personally.

How could I not? When you celebrate wedding after wedding, of your sister, and your brother, and your cousins, and your partner’s extended family, and your friends and his friends as well, and you just want to do the same, yet you cannot because 139 Senators and Members of the House of Representatives back in September 2012 decided that you are ‘unworthy’ simply because you’re gay, well, how could that not feel like a knife right through your heart?

In fact, there are very few contemporary public policy issues for which the old maxim – that the personal is political – could be more accurate. The recognition of our relationships is obviously immensely personal, and it is impossible to deny that whether they are recognised or not, or recognised but with a lesser value than cisgender heterosexual relationships, is inherently political.

That particular saying works the other way, too. The position that each of our parliamentarians adopts on this political issue reflects something profound about who they are as a person as well.

And I’m not just talking about the Cory Bernardis or Helen Polleys of this world, either – Senators who thought it appropriate to link the prospect of marriage equality with bestiality and the Stolen Generation, respectively – although their parliamentary speeches certainly revealed their utter contempt for LGBTI Australians.

I am talking about the MPs who might not say anything ‘overtly’ homophobic during Parliamentary debates about marriage, but who cast their vote against equality nonetheless. In doing so, they indicate that they choose discrimination and inequality over love and inclusion. They stand up against the idea that all Australians deserve equal treatment under the law, instead supporting the notion that some people are ‘more equal’ than others.

Those who vote against marriage equality devalue our relationships, telling us that they are less worthy of recognition than those of other people. And they devalue us as individuals too, subtly (or in some cases, not so subtly) sending the signal that we are less than full citizens of our own country. Even if they do not say the words, their position reveals, loud and clear, that they believe LGBTI people are – and should be – second class.

At its most personal, an MP who votes against marriage equality is saying that they themselves are more deserving of certain rights, that their own relationships are more worthy of recognition, that they as individuals are simply better than LGBTI Australians.

To them I say, “How dare you”. How dare you suggest that, because I am gay and you are heterosexual, you are more deserving of certain rights than I am. And how dare you deny us the rights that you currently enjoy (whether you choose to exercise them or not) simply because we are in a same-sex relationship and you are not.

Sadly, because of the amendments made under the Howard Government in August 2004, and the failure of our MPs since then to remedy this discrimination, the law does make such a distinction.

Today, Wednesday 13 August 2014, those amendments, that legal distinction, this ongoing and unjustified discrimination against LGBTI Australians, ‘celebrates’ its own ten year anniversary.

The traditional gift for a ten-year wedding anniversary is tin. I’m sure you’ll forgive me for not wanting to buy anything special to mark the occasion.

What I will do, what I feel compelled to do on this day, is say to all of those MPs who voted against equality in 2004, and continue to do so now, you truly are the tin men and tin women of Australian politics. You have forgotten that you have hearts, or, at the very least, you have forgotten how to use them. Indeed, it seems you have forgotten what hearts are even there for.

On this, the 10th anniversary of the ban, it’s time to support marriage equality, and in so doing to support the full and equal citizenship of all Australians, irrespective of sexual orientation, gender identity and intersex status. If you do, if you finally agree to pass marriage equality, then you should rest assured that nothing bad will happen. The sky will not fall in. There will be no negative consequences whatsoever.

The only outcome will be overwhelmingly positive. Thousands, indeed tens of thousands, of couples will finally be able to express their love and commitment in front of their family and friends. Couples like Steve and me. We are ready and waiting to say those two small words to each other, “I do”. We just need you to say two other words first, “You can.”

3 thoughts on “10 Things I Hate About Marriage Inequality. #1: Because I can’t marry the man I love”